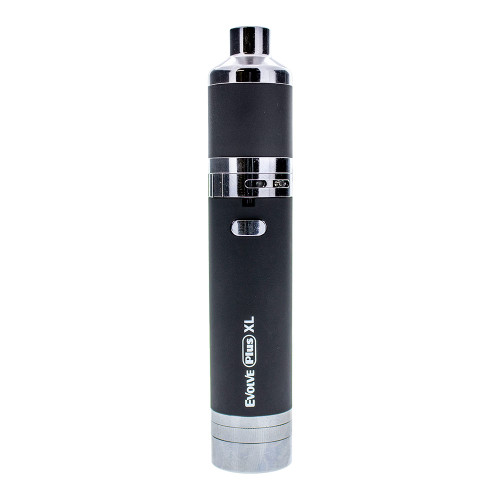 The Yocan Evolve Plus XL is another step up from Yocan as they continue to grow and improve their system! This portable concentrate vaporizer is more than just an extra large version of the Yocan Evolve Plus: this is a completely reinvented product. The most notable upgrades in this model are the massive 1400 mAh battery and the Quad Quartz Coil.

Making up the bulk of this device is the large 1400 mAh battery. Charging via USB in only one hour, this battery is necessary to power the awesome abilities of this vaporizer. But it's not limited to just powering the Yocan Evolve Plus XL's attachments: it features an industry-standard 510 threading meaning you can easily insert your favorite 510-threaded tank or atomizer, although it may look a little out of place on such a wide body.

Taking a step up from the Yocan Evlove Plus, the newly-adapted Quad Quartz Coil features a whopping four titanium-wrapped quartz coils to heat concentrates. The coils heat up instantly and produce massive clouds from concentrates, which could be just what some want from their vaporizers. The coiled tank can hold an extended amount of material, too, to keep you vaping for a long time.

When you run out of material in your tank, you don't have to reach far for some more! At the bottom of the Yocan Evolve Plus XL is a solid-walled silicone compartment, screwed in so as not to be lost while being toted about on your journeys. Just as with the Yocan Evlove Plus, the included silicone jar is split into two compartments to allow you to carry more than one style or flavor of concentrate.

At the top just above the battery on this portable vaporizer is a bordering ring between the battery and coil, and it's an adjustable airflow valve, a much appreciated addition to any vaporizer. Simply give it a twist along its lower ring to adjust the airflow to your liking. More air means more clouds, but thanks to its quad quartz coil this device will always produce the best flavor no matter the airflow.

Included with the Yocan Evolve Plus XL are a load of accessories which include an extra quad quartz coil. Included in every package of the vaporizer are:

The Atomizer of this vaporizer, in this case, includes:

The Atomizer Tube at the tip of this machine, which doubles as its mouthpiece, attaches via magnets to the base so it can be quickly removed, replaced, and cleaned. The Coil Cap screws onto the top of the coil to cap it off and help produce large clouds of vapor by containing and circulating the smoke before letting it slip out of two small holes and up through the atomizer tube to your mouth.

The Yocan Evolve Plus XL can be held on a lanyard for the ultimate in portability. On the battery you may notice a couple of notches on the front and back. Included with the lanyard is a Hanging Ring accessory which is simply slipped in underneath the Base & Airflow Valve, fitting into the notches, and which the lanyard can cling to. Since the hanging ring becomes an attached part of the Yocan vape, and adds no noticeable extra thickness to the vape, you can feel confident knowing it will stay securely connected to your neck.

Everything You Could Ever Need, and 510 Threading for Anything More

The Yocan Evolve Plus XL contains everything a concentrate vaporizer could need, from a 1400 mAh battery to an airflow adjustment valve. Buy one today and you may well never need another vape!

Keep your Yocan Evolve Plus XL working good as new with some replacement parts! Everything wears down over time, and when it's time for new parts to your favorite vape, you can count on Waterbeds 'n' Stuff to carry what you need. Check out these links to replacement parts:

The Yocan Evolve Plus XL is available in assorted colors. The pictures above do not reflect our current selection. Each order will receive a random color.