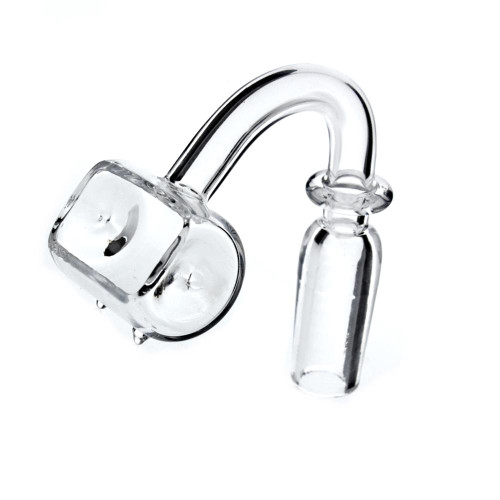 When Joel Halen designed the trough-style banger, he revolutionized the world of dabs. Offering more surface area than any other banger nail on the market, the open scoop-like bucket on the trough allows for even vaporization of concentrates, minimizing reclaim build-up and waste.

Buy the quartz trough today and dab 'till the cows come home!

Will fit rigs with a 14mm female joint.

Waterbeds 'n' Stuff has been in business since 1972, with cheap bongs for sale and various other novelties.

50 years later we have grown to be the most trusted online headshop. We offer premium glass bongs at affordable prices as well as dab pens, e-rigs, and the newest e-nectar collectors. Whether you enjoy smoking with friends or on-the-go, you can count on Waterbeds 'n' Stuff to have what you need at low prices. We even offer free shipping!

The products we carry at Waterbeds 'n' Stuff are not like the cheap dab rigs for sale on Amazon. We spend our time building relationships with brands you know and love, such as RAW Rolling Papers, GRAV Labs, EYCE, Diamond Glass, and many more. These are some of the most popular bong brands in America, and we don't just carry their products but maintain a rapport to ensure we get the newest, greatest products.

The same is true for popular vape brands: Puffco, Randy's, Lookah, PAX, Ooze, and many other vaporizer brands trust us to sell and distribute their genuine products.

But smoking products are not all that we sell. Browse our categories to find what's right for you including Detox drinks, adult toys, mood enhancers such as Addall, and even incense to zen out with. Enjoy 20% off site-wide and free shipping with every order over $35.