Recently there has been a surge in vaporization and the use of dab rigs due to the rapid increase in concentrates. This has lead to the expansion of vaporization surfaces, many of which were discussed in our vaporizer and nail blogs. This blog will more specifically cover one very common type of nail, or vaporization surface called a “banger.” The term “banger” is a broad term that essentially describes a specific shape and style of nail which commonly resembles a bucket with a small bent tube extending to a joint that fits on the end (some exceptions may apply such as the trough and cube bangers). The most common and easiest banger to use is simply a bucket made from quartz with a small air path on the side of the bucket extending into the smoking device of the user’s choice. 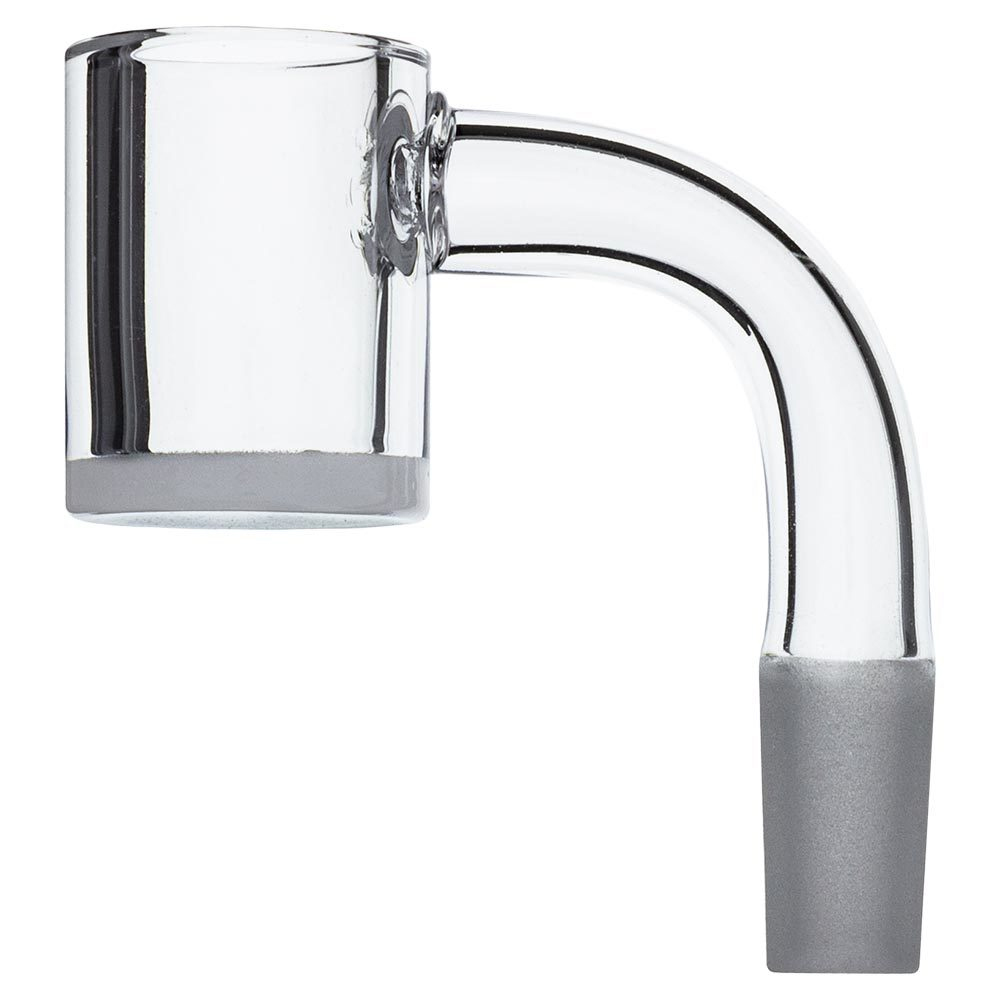 Bangers have risen in popularity due to the design and its recent reputation for providing more than adequate temperature control accompanied by being seen as one of the least wasteful methods of vaporization currently on the market. A banger can be made out of any of a variety of materials just like any nail. However, it is common for first-time banger buyers to think that all bangers are made from glass. This is the most common misconception about bangers. Ceramic, titanium, glass, and quartz are all available material options when considering a banger (for advantages and disadvantages of nail materials see the nail blog), however the most common is quartz. This is due to quartz being considered the ideal material for use with a banger, for this reason, this blog will focus mainly on quartz made bangers.

When considering which banger is right for you, it is important to know that besides different materials, vapers have the choice of many different various styles of bangers. There is the classic bucket style, gavel, trough, cube, thermal, reactor, diamond knot, and nucleated. These are perhaps not all the options, however, these are among the most popular and successful that are available in the current market. Having already discussed the classic bucket-style banger, let's take a look at the other options on the list.

Gavel-style bangers are a variation on the classic bucket-style bangers. These gavel bangers typically are much larger than the classic bucket-style featuring a flat top and have an extra thick bottom for longer heat retention. Gavel bangers have quickly become a favorite style of many high-end companies and are the flagship shape for many of those companies’ bangers (including Highly Educated, Eternal Quartz, Honey Bucket, and many more). This has even led carb caps (a common concentrate accessory) to evolve in a manner that caters to flat-top gavel-style bangers.

Trough bangers are designed with an elongated, more shallow bucket, this allows for what many vapers consider to be a less wasteful hit. This is because the shape of the bucket allows for a more even heat distribution along the bottom of the banger. The shape of a trough banger is also considered by many to be aesthetically pleasing and requires a special shape carb cap if the vaper chooses to use one. Trough bangers can often be seen in use by many popular Instagram influencers in the dabbing community when they attempt to entertain viewers with massive hits off a single banger. This is due to the common conception that the heat distribution allows for larger hits than the standard bucket-style banger.

Cube bangers are a slight variation on the classic bucket-style banger, which some vapers claim maintains heat more efficiently than the classic bucket. However, there has been no substantial research done to validate this claim and many say that a cube banger, outside of its standard function is more of a decision that is made based on aesthetics.

Nucleated bangers have made a big splash in the past year. This is due to a reputable company called Highly Educated utilizing nucleated glass in their award-winning nucleated gavel-style banger. Nucleated glass appears to be white at first glance, however, upon closer inspection, it is actually small gas-filled chambers on an almost invisible level. The nucleation sites allow these bangers to maintain the vaper’s desired temperature for almost twice as long as a traditional quartz banger and aids in the physical separation of solids, liquids, and gases. They also increase the heated surface area and thermal diffusivity which distributes heat more quickly and evenly. This allows the vaper to take the lowest temperature, most flavorful, and largest hits of any banger on the market. The nucleated banger, Gavel V2 made by Highly Educated, was even selected as the Best Quartz Banger of 2017 by High Times Magazine. Thermal bangers could be perceived as the relatively new kid on the block. They haven't been around for long, however, thermals are surely beginning to take over the market. Many (but not all) big names have decided to endorse this style of banger as the best for flavor (companies such as Puking Beagle). This is because of the fact that a thermal banger eliminates the only step that could be considered crude combustion in the current concentrates vaporization process. Some people argue that combustion can occur and it can be harmful to vaporize your substance directly off the surface that has been heated, which is called conduction vaporization. Thermals eliminate this step by having a double walled interior. This means that instead of allowing your substance to touch the directly heated area causing conduction vaporization you are instead only using the heat that is radiating off of the directly heated surface with no actual contact. This method of vaporization through the use of an indirectly heated surface is called convection vaporization.

The convection vaporization achieved with thermal bangers has inspired many other methods of convection vaporization to come to fruition, such as an accessory called the quartz cup. This is an insert for some larger classic bucket and gavel style bangers in which the vaper, pre-loads their concentrates into a separate quartz cup then heats the banger. When the banger has reached the vaper’s desired temperature, the cup is inserted into the banger and the substance inside the cup is vaporized with convection currents. Reactor bangers have recently become more popular, as they follow the shape of a gavel style banger, making them slightly more universal than a traditional thermal banger. This being said, they do have a thermal feature making them what some people consider a cross between a thermal banger and a gavel banger. Reactor bangers feature a quartz pedestal in the middle of the banger, this is used for two things mainly. The first being a way to retain heat as well as increase the internal temperature of the banger when a carb cap is applied, the second is a means of avoiding conduction vaporization by giving the vaper a convenient, alternate surface which hasn't been heated directly where the vaper can place their concentrates. Due to the design, it is recommended to use a directional airflow carb cap which will allow the vaper to move their concentrates around the banger and hit all the hot spots evenly for more effective vaporization. Diamond knot bangers are essentially a variation of the thermal banger. Aesthetically, this banger is most commonly related to the classic bucket-style banger, however, it has a very unique center portion. The center of the diamond knot banger is designed to efficiently trap heat and keep the internal temperature of the banger higher than average due to the porting of the middle section. It also increases the surface area provided by its unique center portion. Diamond knot bangers can be difficult to cap due to their unique features, therefore it is recommended to use a marble style carb cap.

Thermochromic bangers are an interesting new innovation in bangers. These bangers have a layer of colored fritted glass between two separate. The colored fritted glass changes color at different temperatures allowing you to find the perfect color for the type of dab you want to take. If you want to get precise you can use an infrared thermometer to figure out exact temperatures and corresponding thermochromic bangers you like the best. Remember low-temperature dabs will produce smaller more flavorful hits, while high-temperature dabs will produce larger and less flavorful hits. This ability to conveniently gauge your banger temperature is a definite way to improve your dabbing experience, that's why the Thermochromic Banger by Whitney Harmon Glass won number seven in High Times Best Bangers of 2017.

Overall, the number of bangers has greatly expanded, even in the past year. Bangers are clearly one of the fastest growing products in the concentrates industry, with many more advancements just over the horizon. With the popularity of concentrates and vaporization increasing daily, it will come as no surprise to many vapers that the number of choices will continue to expand and more options will soon become available. So many choices make it confusing for some people to decide which banger is best for them. However, using this blog as a way to get better acquainted with the options on the market a vaper should be able to pick which banger is best for them based on the characteristics of their desired use, durability, flavor, and complexity.