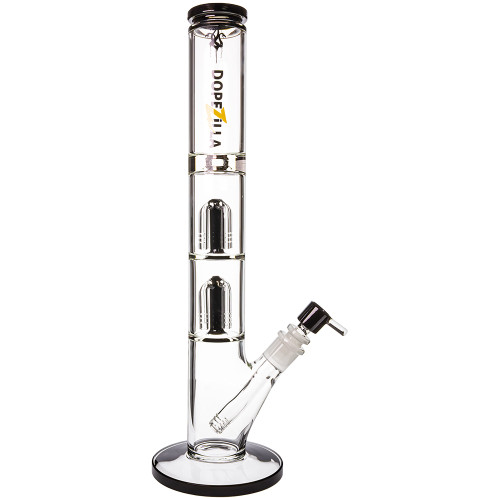 Cut one head off and two more take its place! The 16" version of the Dopezilla Hydra Bong features not just one, but two 4-arm tree perc chambers to percolate your smoke.

This 16" Dopezilla Hydra Water Pipe joins the likes of Cerberus in Dopezilla's epic lineup of mythological-themed pipes. The Hydra was a mythical beast, a large multi-headed sea serpent who, when one head was cut off, would grow more back in its place. I'm sure we've all seen Disney's Hercules! Well, this bong earns its namesake from its two percolation chambers- twice that of the shorter 13" version, and each sporting 4 diffusing heads! Who knows, maybe Dopezilla will even release a version with three chambers!

This is a 16" straight tube bong with a traditional angled downstem at the base, two perc chambers, and a bullet-hole ice pinch above them, leaving a good 5" for ice near the mouthpiece to cool your smoke.

Make it a Rig

If twin tree percs is too much percolation for your tastes (or your materials), check out the shorter, single-perc Dopezilla 13" Hydra Bong. It's the same as this 16" Hydra but with one less tree perc.

Here's what the 16" Hydra Bong's box says about itself, straight from Dopezilla: