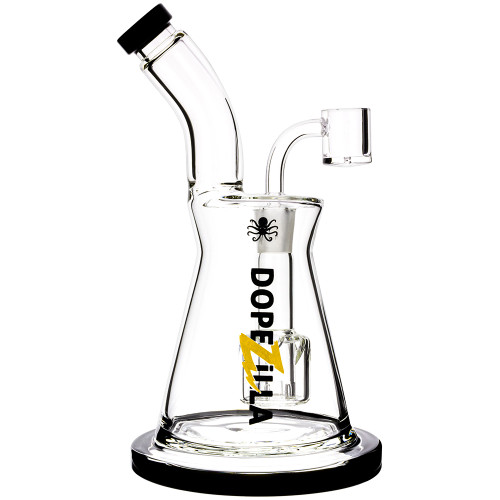 Summoned from the depths of the waves, the Kraken rises to serve you! Dopezilla has unveiled a new mythology-inspired water pipe for your enjoyment, joining the ranks of such pipes as the Cyclops and Hydra. Dopezilla's 8" Kraken Rig is very similar to the Basilisk in that it's a upright bubbler-style rig with a vertical downstem that comes down from the top and into a barrel perc. What sets the Kraken apart is the shape of its body, which acts like a whirlpool to spin and circulate the water inside, and its hourglass shape works like a splash guard to keep the water contained.

The vertical, inline downstem on this pipe is slightly set off of center to give it a very unique look, yet balanced between the bent banger hanging off the top and the bent neck rising from the opposite side.

Every Kraken Rig includes a 14mm banger for use right out of the box.

Here's what the box says, straight from Dopezilla:

Sailors beware, the Kraken has arrived. Comprised of thick borosilicate glass and a drum percolator, get your tentacles on this rig before it's gone.

The Dopezilla Kraken for sale has black colored accents around the mouthpiece and base. The rest of the pipe, aside from the logo, is crystal clear.

We want to help you get the most from your pipes! If you are looking for some replacement pieces for this Kraken Rig, whether you own one or want some spare parts for your new piece, don't worry: we have a large selection of comparable parts to replace anything broken or lost. But fortunately the Basilisk only has one replaceable part, the banger! That's easy, check this product out:

Looking for something but can't find it? Maybe it's a product you saw in one of our stores?
Call us! Monday - Friday from 9 AM - 5 PM, EST. Or email us at [email protected].