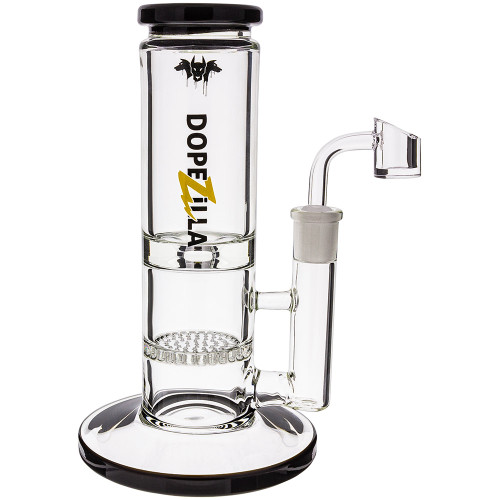 Don't let the name intimidate you; this hound from Hell is easy to tame. With a single honeycomb perc and loads of space to hold ice, the Dopezilla Cerberus 8" Rig is primed to deliver the best flavor from your dabs and waxes!

Built on a 4.25" wide base for great support, this short rig offers little between you and your dabs which, some would argue, is the way it should be. This 8" version of the Cerberus includes a quartz banger, and the 90° downstem brings smoke straight into the water chamber at the bottom, where it will be pulled through the honeycomb perc. The Bullet Hole Ice Catcher works as a splash guard to keep the water contained while smoke rises through, and affords about 3" of space for ice to cool your dab vapor.

The Hound of Hades, Cerberus features thick borosilicate glass, a bullet hole ice catcher, and honeycomb percolator, delivering substantial cooling and diffusion to quell even the fiercest flames from the underworld.

Each Cerberus 8" Rig for sale features accent colors around the base and the mouthpiece, and also in the Cerberus logo.

Make it a Bong

The Dopezilla 8" Cerberus Rig features one single honeycomb perc. If that's not enough, we have 2 larger sizes, each including one more perc than the last. The 12" has 2 honeycomb percs, and the 16" features a whopping 3 honeycomb percs! If percolation is power and you want more, check them out by following these cards: