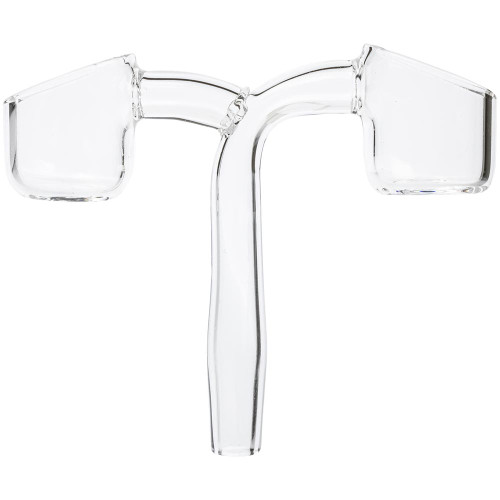 Have you ever wanted to mix your dabs, but didn't want to burn the terpenes of one? Or maybe one banger isn't enough and you want double the dabs! If either of these describe your thoughts, you need this 10mm Double Banger.

The double banger is a 90 degree quartz banger with a second banger connected behind it, allowing you to enjoy twice the vapor at two separate temperatures. Its 10mm male joint is small, so be prepared to use this on your mini rigs and other smaller dab rigs.

Why would I need two different temperatures for dabs? Terpenes, which make up the flavors in dabs, get released at specific temperatures. If you get a dab too hot for its terpenes, the flavor will become burnt and not as good as you would want from your quality waxes and concentrates! So you don't want to just mix dabs, then both might become unenjoyable. With a double banger you can enjoy two dabs at two different temperatures, each side set to release the maximum flavor for its dabs.