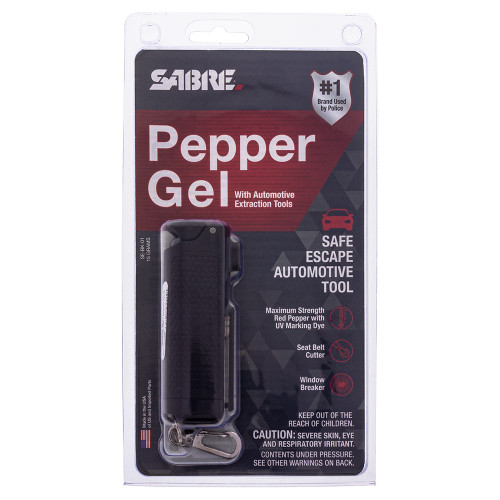 Finally, a tool to help keep you safe through life. Whether in your car or out of it, get peace of mind with this 3-in-1 Safety Tool combining the security of a strong red pepper gel with two car escape tools: a belt cutter and a window breaker.

This product is designed to facilitate the escape from a vehicle in the aftermath of a car crash, and also has a high-irritant pepper gel designed to only affect the target. Learn more below.

Pepper Gel, unlike more traditional pepper spray, is a safer, more effective form of a protective measure. Unlike a spray which can contaminate the air and affect you as well, gel is designed to only affect the target, taking effect on contact with skin. This tool features enough gel for 25 burts, and Sabre's proprietary blend is 5x more effective than other brands.

Hidden behind a safety clip so it won't cut unintentionally, the built-in belt cutter safely cuts malfunctioning seat belts in seconds. Simply slide the belt in and pull the cutter hard.

Regardless of thickness, tinting, and even glass designed to be bulletproof; a strong blow with an intense point is enough to break most windows. This tool features a steel tip, covered by a removable silicon ring to protect from unintentional stabbing, used to puncture windows for quick escapes.

What Does Sabre Pepper Gel Do?

When Should I Use my Sabre Pepper Gel

For complete peace of mind, carry the Sabre Pepper Gel with you at all times. Deploy when you feel your safety is in jeopardy or you are attacked, then run and call the police immediately- do not try to capture your attacker!

How Do I Deploy my Sabre Pepper Gel?

How do I Use the Safe Escape to cut my seat belt?

How do I use the Safe Escape to break my car window?