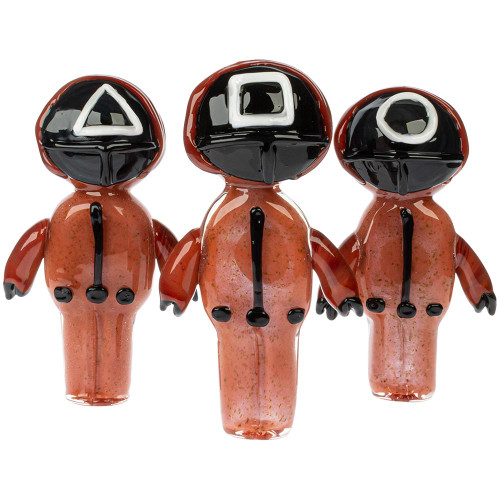 Attention tokers: the next sesh is about to begin.

Make sure every smoke sesh is killer with one of these Squid Game Masked Worker Hand Pipes from Blowfish Glassworks.

Modeled after the soldiers in the hit Netflix show Squid Game, these hand pipes are hand-blown by artists in America for you to enjoy. A big head hides a large bowl in the back, and the front is modeled with jacket and leg details and even has hands! There's a carb on the left side and a long chamber to cool smoke.

Are the masked workers in Squid Game pink or red? Despite being labeled "Pink Soldiers" and appearing hot pink or magenta in the show, they're actually red! These hand pipes are created in a deep Sedona Red that will have you questioning if it's pink or red while smoking out of it.

Grab one of these Squid Game pipes asa gift for your friends (or yourself) today!