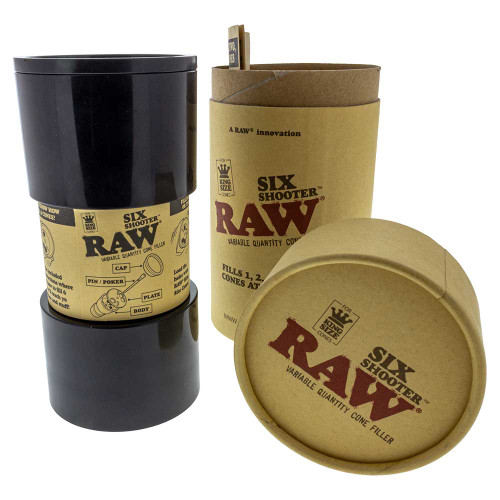 Being the King of cone smoking now became easier with the brand new RAW Six Shooter. This Raw cone loader can fill 1, 2, 3, or 6 King Size RAW Cones at the same time. With a design inspired by an old Spanish millstone, just remove the center pin and move the plate to fill 1, 2, or 3 cones at the same time. When you need to fill all 6, simply remove the plate entirely. Fill the holes with RAW King Size cones, add your favorite smokable blend to the top, replace the lid and smack it on a hard surface. You can finish them off by using the pin, which also doubles as a poker, and in about 45 seconds you have up to six perfectly smokable cones! The RAW Six Shooter also acts as a carrier for your filled cones, so smoke em’ all now, or save a few for later, it's up to you!

Instructions are included inside. You can also check out our blog on how to make a cone joint. Raw King Cones are not included, so be sure to pick up some Raw cones for your new cone filler!

We also have single loaders for King Size Cones  and if you like them a bit smaller we have Raw Cone Loaders for 1 1/4 Size Cones.

RAW Wake Up and Bake Up Cone Holder Mug